On August 13, 2022, one of the superskirmish themes was "The Last Summer Moon." I didn't have time to do it then, but I immediately started thinking of doing a beard romance song. Then I ... took it a bit further. So this (most definitely #NSFW in theme, although there are no actual bad words) is the result.

Although the theme arose from a skirmish, this took way, way longer than the allotted hour, so probably doesn't count as a "skirmish song" itself any more. But that's OK, because I'm actually quite pleased with how it came out. It needs to be cleaned up a bit (in execution, not theme), but I think this is a keeper for re-recording and release after 50/90.

Part of the reason it took so long is because I wrote the lyrics first, and expected to perform it as hair metal (to the best of my modest abilities). But when I actually started fooling around with by amp sim and playing and trying out melodies, it kept gravitating towards country rock (or whatever this is). So I gave up on the original vision and went this way instead (and, as mentioned above, I'm quite happy with the result).

Lastly, here's an AI generated image from Dall-E of "cartoon of woman and bearded man kissing in the back seat of a car under a full moon." 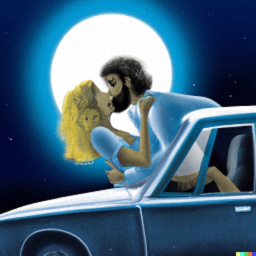 And you know that in the back seat of that car
Oh, my beard was gonna take her far

There's something sort of poignant about the naivté of the boy juxtaposed with the worldliness of the beard. And the best of the narrator happens to be his beard, which comes across as a separate entity altogether, which is sort of touching, too. Catchy as always. Do you do these songs all on midi keyboards? I'd like to see how you put things together. Maybe a Youtube channel is what you [I] need

What a great take on a great idea. I like that you avoided the direct, and usually rude, approach. You've nailed it, I think.

Such a lovely tale of a thruple between a girl, a boy, and a beard.
Yeah, I'm liking the country rock style.
You continue to knock em outta the park, OG.

i like that jangly byrds-style guitar and you tell the story so well that i believe it. my favorite part is when you shift into lou reed mode for the chorus.

A jolly follicular la-la lollipop of a tune!

This is incredible! I'm laughing and crying and singing that fantastic hook in a public place and getting some very weird looks from passersby. Certainly an unexpected direction for this prompt but quite fun! As the former owner of a very long beard and outrageously long mustache, this one hit home in a few different ways. Ha! Well done.