Here's the Weirdo Experimental Corpse which I, @fuzzy, have named "The Sinister Kittens From Dimension X".

Here are the musicians in order of appearance;
@w1n
@fuzzy
@gardeningangel1
@ferry0123
@wolfkier
(and then briefly @fuzzy again to finish it off)

I've named the parts, as well, to provide a narrative;
1. The Kittens Appear And At First Charm The Hearts Of Millions
2. The Kittens Reveal Their Sinister Agenda
3. The Armies Of The World Attempt To Destroy The Kittens
4. The Kittens Bid Humanity Goodbye As They Easily Defeat The Earthlings
5. The Kittens Throw A Dance Party To Celebrate Their Conquest
6. A New Generation Of Sinister Kittens Is Born 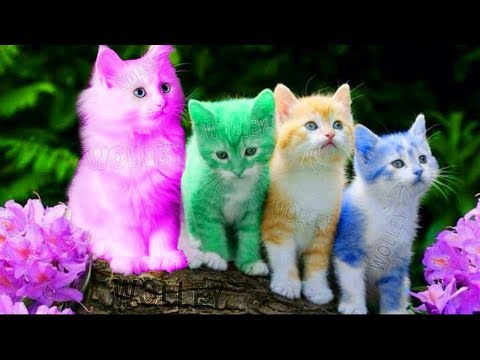 By giving this this title and adding backgrounds to the music this turns out to be fitting together very nicely (and it already did). The cat theme is spot on, I'd say. And the creativeness in the miow's are definitely my cup of tea! Great job, @fuzzy.

And the cycle of sinister kittens begins anew.
This turned out great! Excellent narrative-building and kitten-wrangling, @fuzzy
This would make a great cartoon. My cat was listening attentively and appeared to be taking notes with her tale: she may be a sleeper agent.

The part names are great, and, alongside the bizarre but captivating soundscapes, create a very immersive "mind movie." I was never quite sure where it was going, nor am I sure where I have been, but I very much enjoyed the most peculiar trip!

Stanley wasn't a big fan, but I liked it. The first piece is very Residents-like, the second like being caught in a giant whooshing vacuum, the third a bit of spacey calm, the fourth a get-up-and-dance woozy party (recognizably Ferry-ish) with cool noises and voices, the fifth like a bizarre "Another One Bites the Dust" w/great percussion, and the sixth a suitably weird ending. Good work, guys!

I forced my cats to listen to this one and they didn't move from their spots. This is a great little epic. I just see space kittens floating around with little spacesuits on.

Kittens!! @billwhite51 is onto something with the idea of animating it - it would be a global phenomenon if told the story! The soundtrack itself is outstanding - a narrative told that needed to be told. Structurally, everyone's contribution is perfectly positioned in the narrative - setting the tone for the next chapter - I don't even have a favourite as they all do their job so well, and much closure with the final moments. Lots of fun, Moody, funky, riotous, groovy, sinister, impossible to resist. A most definite exquisite and awesome corpse!

Folks, I'm not sure what thou hast all wrought with this, but judging by the density of kittens per measure, it's about to conquer the Internet. This is gloriously weird, but there's a clear narrative and it's ridiculously good fun from start to finish. You may declare your experiment a success!

Kittens! And a list of artists that make up a veritable supergroup, how could I resist?
This is all kinds of awesome. I'm listening on headphones, alone in the house, and I keep looking over my shoulder! It's creepy, creative, and fabulous. Thank you for bringing this into the world!

I pronounce this experiment a complete success! The corpse is ALIVE! Alive! hahahahah......

That first section is wonderfully weird and sets the scene for what is to come next. The whole thing progresses really well and the named parts give thing an interesting narrative.

Lol. This was bizarre! Which means it’s perfect!!! Love the extra dimensional cat theme you wove into this. I bow down to our cat overlords though I know they will still push me off the kitchen counter with their paw.

This is so crazy! I really love it! Especialy part 6!

i love this sinister variation on the cutesy meow meow singing cat cartoons. now if only someone would animate this soundtrack.