months ago i put together a #eurorack #modular synth for making rhythms, but it hadn't gotten much use yet since it's kind of intimidating. so this is a #one_take #dawless #jam after patching it up today. here's a pic of the system, with some high-level patch notes below... 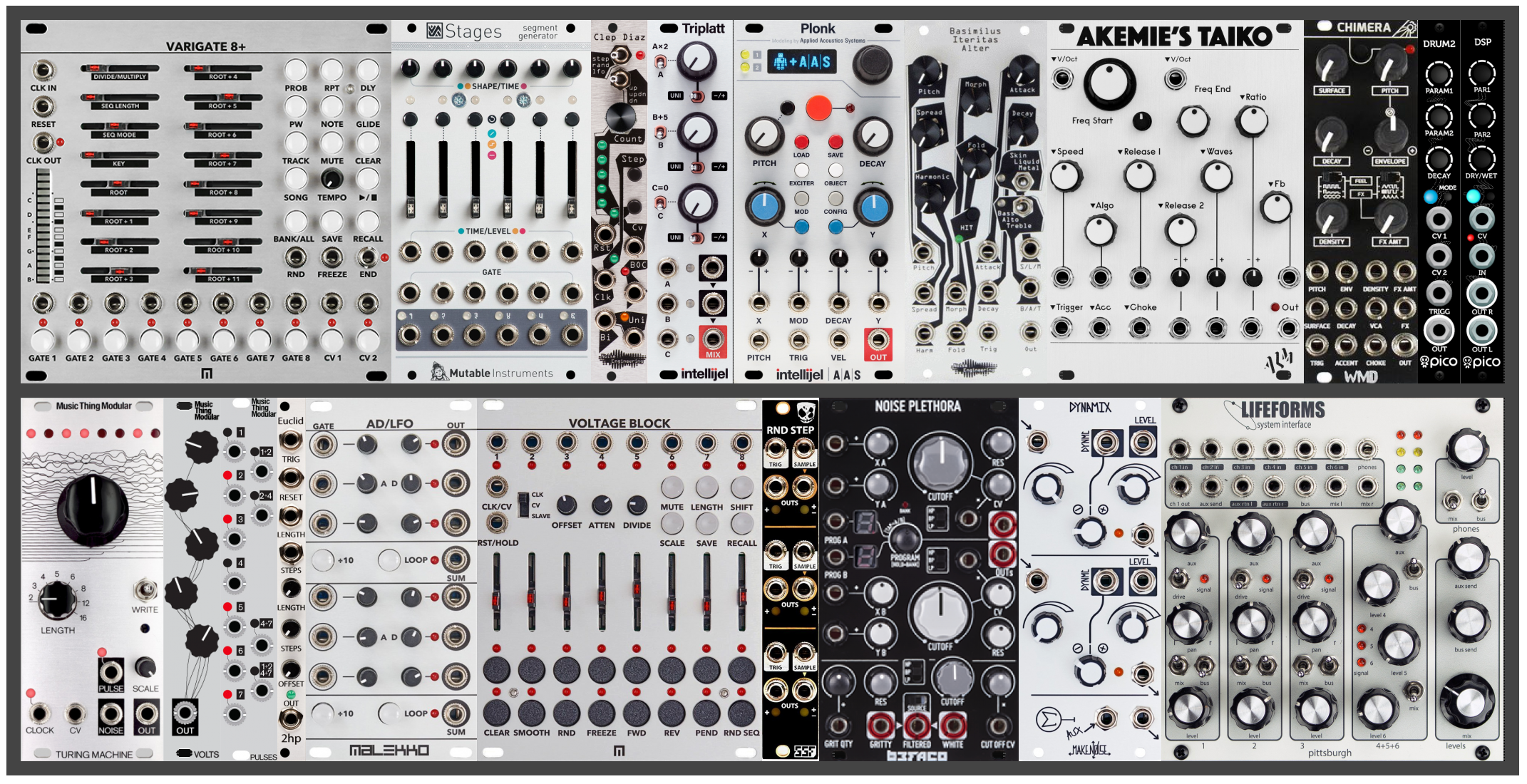 the main sequencers are VARIGATE 8+ (core rhythms) & TURING MACHINE (w/ expanders, for random melodies & rhythmic accents). each of the #sixparts have some notes that always hit (like 1,5,9,13 for the kick), & some others that *sometimes* hit. i manually mute channels to bring things in & out for variation.

voices in order of appearance...

1. AKEMIE'S TAIKO is first, with pitch control & lots of modulation from the TURING MACHINE to change its timbre. it's sort of the "lead."

2. BASIMILUS ITERITAS ALTER is the kick. at certain points i unmute a cv channel on the VARIGATE for pitch control to make it a "bass" part, too.

3. CHIMERA is sort of the hi-hat, with ~50% chance of hitting on almost every one of the 16 steps in the sequence.

4. PICO DRUM2 is in "space snare" configuration, always hitting on 5 & 9 with a few other probabilistic hits to act as a snare.

5. PLONK is in "noisy tom" configuration, only hitting for the last 4 steps of the sequence with increasing probability on each step (a "fill" of sorts).

6. finally, NOISE PLETHORA running into DYNAMIX is a (relatively) slow random noise sweep that happens only very occasionally. its volume & all parameters are being modulated by different envelopes all triggered from the same gate.

i also use STAGES, VOLTAGE BLOCK, & RND STEP as modulation sources throughout the system to vary the timbres of all voices.

everything is mixed into the SYSTEM INTERFACE with PICO DSP in "pitch shift delay" configuration on the aux/effects bus. i ran the stereo mixdown direct into my ZOOM H6 & recorded in a single take!

Some really funky rhythms emerging from such complex modulation! Super lovely sounding - lots of IDM style shuffling patterns coming and going - so pleasurable to the ears and brain! Lots going on in the spacial realm - forwards and behind - a great headphone experience! reminds me a lot of some of the stuff u-ziq would get up to - uplifting and a touch of joyful expression, through machines no less! Awesome!

Stunningly rich sounds! It's astonishing how many textures and how much variation can be had with the limitations you've set for yourself. I was listening as I was doing some fairly routine paperwork, and the work just slid by. 😀 Oh, the stereo field is really awesome. I'm basically planted between two bit JBL tower speakers that are about three feet on either side of me, so it was totally immersive.